Quality products & the highest level of service, since 1950. 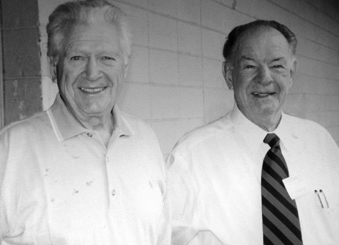 Back in the 1940s, TC DeVore was a World War II veteran and Silver Star recipient who worked for Stewart Supply Co. out of Greenville, S.C., and Cecil Johnson was a salesman for Noland Co. in Atlanta. They both called on the Northeast Georgia territory and were fierce competitors who frequently crossed paths in Athens.

One night when TC tried to check in to the Holman Hotel — a popular spot for traveling salesmen in the area during the late 40s — he was told “no vacancies.” However, the hotel desk clerk told TC that he could share a room with another young man if he wanted. Imagine TC’s surprise when he returned from dinner to retire for the night and found his competitor, Cecil, as his roommate. Much like a great movie plot twist, this chance encounter sparked a friendship, which quickly led to the partnership that formed DeVore & Johnson in 1950.

The men worked hard in those early days building their business. By day, they would call on customers and handle sales, while at night, they would roll their sleeves up and re-stock the shelves. They even unloaded material by rail car, and picked up material nearly every day in Atlanta. All this extra effort led to some great inventory turns!TC DeVore receives induction into the 2015 Class of Georgia Military Veterans’ Hall of Fame

In 1995, TC’s sons, Ted and Mike DeVore, took over ownership of DeVore & Johnson. The company is still headquartered in Athens, but now also has branches in Forest Park, Suwanee, and Kennesaw, GA. DeVore & Johnson services the Southeast with primary truck routes, and supplies jobs throughout the nation with direct material shipments. They maintain a balanced inventory which caters to the residential, multi-family, and commercial plumbing markets. A few of their more high-profile jobs include: Porsche North America Headquarters in Atlanta, the athletic dormitories for the 1996 Olympics, multiple jobs around the University of Georgia – including Sanford Stadium, the new Student Learning Center, and the Tate Center upgrades.

A proud member of the industry’s premier buying group, Embassy Group, Ltd., since 1992, DeVore & Johnson credits the resulting relationships with other high-profile wholesalers and vendors in assisting with their growth and success over the last 20 years.

In May of 2016, DeVore & Johnson joined other market leaders throughout the U.S. as part of the MORSCO team. MORSCO is a leading plumbing and HVAC supplier with locations across the country. MORSCO’s acquisition of DeVore & Johnson expanded their footprint in the Southeast and helped provide DeVore & Johnson’s customers with an even better level of service.

DeVore & Johnson is proud of their more than 65 years of exceptional customer service, and are looking forward to the future while always remembering what’s important:

“What sets us apart is first- our people, and second- our focus on service above all else. Everyone at DeVore & Johnson is on the same page- the customer is why we open our doors every day. It’s that simple”.